UVD Robots, the world's leading manufacturer of disinfection robots, introduces the third generation of its autonomous mobile robot that eliminates viruses and bacteria in the air and on surfaces using UV-C light. The new hyper intelligent robot shows users how well it has disinfected, enabling optimization and quality control. The user-friendly robot’s footprint is quite small which means the robot can operate in very narrow areas, expanding the environments and market segments where the robot can be deployed.

The new robot is based on massive learning and response from the global market over 5 years, including hospitals and other customer groups with high level experience in infection control. This deep insight and knowhow has been digitalized and put in algorithmic form and with it a wide range of new features and functionalities have now been launched with the robot and deployed in an early release at many customer sites around the world. This also shows that the future of autonomous UV robots will be much more driven by software and advanced sensors than just hardware alone.

Unpack, hit play - and disinfect
“We have designed the world's most advanced UV robot, which is also the world's simplest to use,” says Per Juul Nielsen, CEO of UVD Robots. “Anyone can install the robot in a matter of minutes and immediately put it into operation, disinfecting bacteria and viruses from the air and any surface.” The third-generation robot from UVD Robots can also navigate and operate in very small and narrow environments, which opens up new market opportunities such as the autonomous disinfection of small hotel rooms. The new robot has a significantly smaller footprint than its predecessor, yet boasts exactly the same disinfection strength. “The more agile robots are, the more useful they can be in automating disinfection,” says Nielsen.

Originally, the invention of UVD Robots was developed to fight hospital acquired infections among patients and healthcare professionals. The problem is overwhelming; Millions of patients get a hospital acquired infection each year, and many of these patients die as a direct result. The corona pandemic has further emphasized the need to also combat the spread of infection beyond healthcare environments. Sales have been growing strongly since the beginning and in 2020 sales have accelerated further as the Danish disinfection robots now play a central role in many types of workplaces all over the world.

“The largest share of the robots that UVD Robots delivers are to the healthcare sector; others are supplied to a very wide range of industries that want to use modern technology to effectively protect guests, students, travelers and others that stay in potentially contaminated areas,” explains Nielsen. Worldwide, there are more than 30,000 hospitals and studies show that at least 10 percent of those infected with Covid-19 in one of the world's hardest hit countries during the pandemic, the United States, are healthcare professionals. “We are also seeing a large order intake from shopping centers, pharma/life science and commercial airports, among others,” says the UVD Robots CEO, adding that there are 17,000 airports worldwide. 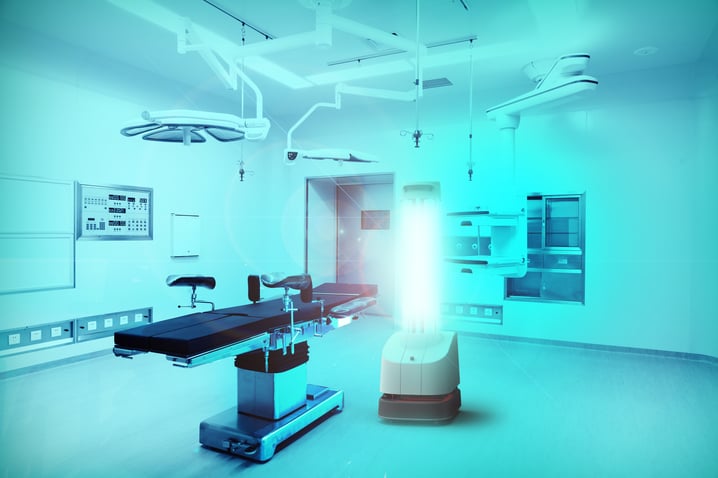 The new robot is hyper intelligent and shows users how well it has disinfected, enabling optimization and quality control. The user-friendly robot’s footprint is quite small which means the robot can operate in very narrow areas, expanding the environments and market segments where the robot can be deployed.

A world first in the disinfection market
“Our third generation autonomous mobile UV-C disinfection robot is the world’s first of its generation and definitely a game-changer in many ways, that will forever change the future of the use of UV-C robots for disinfection across a range of industries,” says chairman of the board of UVD Robots, Claus Risager, and continues, “The robot has an unrivaled safety system that uses four layers of safety, enabling the robot to move around in all kinds of environments - even in highly-trafficked areas - as it shuts down if people get too close. It has a unique capability to sense, document and show the users how well disinfected an area is, enabling the user to easily and quickly adjust the process and optimize the quality if needed. A feature not found in any other UV-C disinfection robot in the world. All of these unique features are patented.”

UVD Robots is a subsidiary of one of the world's leading groups in the development of service robots for professionals, Blue Ocean Robotics. The Group's CEO Claus Risager, who is also Chairman of the Board of UVD Robots, states that professional service robots are now proving their legitimacy.
“With our service robots, we have shown how the world can use robot technologies in the future to create a safer, healthier and more sustainable life on our planet,” he says and continues: “We have deployed a large number of UVD Robots in countries such as China, Italy and USA to help them fight the spread of the Covid-19 infection. Our telepresence robots from GoBe Robots are used to enable humans to physically meet and move around virtually despite closed borders, quarantine, hospitalization or other restrictions,” states the Blue Ocean Robotics CEO, adding that the company will soon be ready to launch another technological solution to a general challenge in society.

Blue Ocean Robotics is headquartered in Europe’s robot capital ''Odense'' in Denmark, where the group develops, produces and sells professional service robots primarily in healthcare, hospitality, construction, and agriculture. The robots are developed from problem, idea and design over development, commercialization and all the way to scale up. Each robot is placed in its own subsidiary-venture company, making Blue Ocean Robotics the world’s first Robot Venture Factory.