The Danish “Robot Venture Factory,” Blue Ocean Robotics, has just acquired all assets and rights associated with Beam® from Suitable Technologies, Inc. in Silicon Valley. The acquisition of the popular telepresence robot adds to Blue Ocean Robotics’ portfolio that also includes products such as the award-winning UVD Robot used to disinfect hospitals, a solution that can now be offered in tandem with Beam.

Blue Ocean Robotics headquartered in the heart of the robotics cluster in Odense, Denmark, has just signed an agreement with the United States company, Suitable Technologies - one of the world’s most known and popular brands in telepresence robots - to acquire the assets and rights associated with the robot Beam. The execution of the agreement is subject to a formal approval in the United States.

Beam Presence technology enables Beam users to be present and to interact naturally from anywhere in the world by combining high-quality, lifelike audio and video; dependable, effortless mobility; and low-latency transmission for an impactful human presence. Beam allows users to connect into a remote location and have a presence there via a display, camera, and microphone placed on wheels that the user can physically navigate around, receiving a live video stream from a remote location as it is being explored. Blue Ocean Robotics has been a partner of Suitable Technologies for more than five years, pioneering the emerging technology.

Beam was the first telepresence robot to visit the White House, enabling then-President Obama to meet founder and project coordinator of the Disability and Visibility Project Alice Wong at the 25th anniversary of the Americans with Disabilities Act. The robot has helped Microsoft Research optimize the day-to-day operations across its geographically dispersed engineering teams, enabled VMware employees to work from home 2-3 days a week while maintaining visibility and connection with the corporate office, and provided Michigan State University’s virtual students with an authentic on-campus presence.

“Through our multi-year partnership, I am confident that Blue Ocean Robotics has the commitment, knowhow, and passion to support current Beam customers, acquire new customers, and build the business into new areas,” says Scott Hassan, CEO of Suitable Technologies, Inc.

“Beam has turned out to add an incredible amount of value to our customers delivering benefits such as reducing transport costs and CO2 emissions while also improving social relationships with better, faster and more frequent communications between people,” says Blue Ocean Robotics CEO Claus Risager. “This has resulted in numerous customers coming back time and again to have more robots installed as Beam can be used in such a wide range of scenarios; from security clearances, to touring art museums and trade shows, to medical consultations, allowing sick children to interact with their school and friends,” says the Blue Ocean Robotics CEO, who has seen a constant increase in Beam sales. “The revenue growth and market potential prompted us to move forward from partner to acquire the entire business,” says Risager, emphasizing the great strategic significance of Blue Ocean Robotics now having majority ownership of all its portfolio robots.

“With this agreement, we will own 100% of the Beam business. As a result, we now own both Beam and our UVD Robot a famous award-winning robot used for UV disinfection in places such as hospitals,” says Blue Ocean Robotics CEO, adding how both robots are currently scaling globally. “We are setting up a worldwide distributor network, the production is maturing, and the customer support and service functions are being expanded upon in collaboration with our distributors,” says Risager, explaining how the purchase also marks a change in direction for Blue Ocean Robotics, which until now has mainly been focused on developing its portfolio of robots in collaboration with strategic user clients. “Now the time has come to generate solid global sales. Both employees, management and the owners are looking forward to this exciting journey.”

With the acquisition, Blue Ocean Robotics sees an opportunity to generate additional synergy: “Our development of robots is based on our own in-house created toolbox with reusable technology components. This means that we can build all of our robots fast, inexpensively, and better than others,” says Blue Ocean Robotics’ CTO John Erland Østergaard. “Some of our robots, for example the UVD disinfection robot, are already equipped with remote controls. With the Beam technology being a big seller in the healthcare sector, we can continue to grow our business within this industry by having our distributors present both UVD and Beam when they visit customers.”

Blue Ocean Robotics is the world’s first “Robot Venture Factory”. The company is known for developing professional service robots from the problem, idea and design phase to the development, commercialization and scaling phase. Every robot is placed in its own subsidiary which is responsible for scaling sales, customer service, support and everything else oriented towards global markets and customers. The parent company handles all development and production of robots across the organization. The acquisition of the Beam business therefore means that Blue Ocean Robotics has set up a subsidiary, Beam Robots ApS, to manage global sales.

Claus Risager states: “The acquisition of Beam is a good strategic move. However, it is also a challenge we are prepared for, where we are going to create a new setup for production and development and our teams working with sales, support and services will be enhanced as well. So, it’s both a large task for our employees and management and it also requires capital, as we expect the total investment from the parent company to end up amounting to several million dollars.” 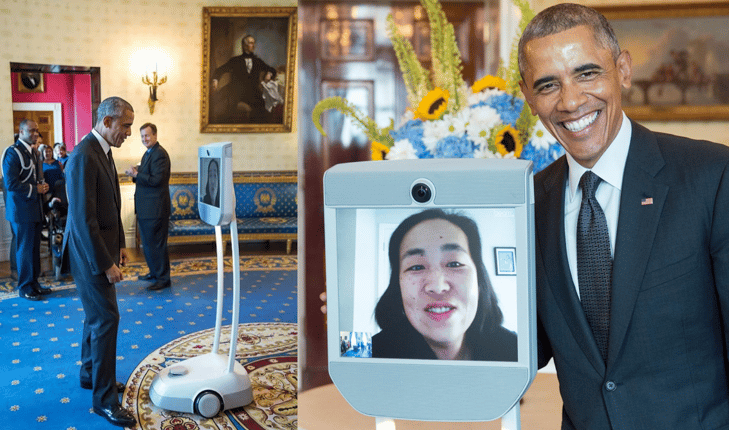 In the picture above, Barack Obama greets Alice Wong, founder and project coordinator of the Disability Visibility Project, via Beam during the Americans with Disabilities Act 25th anniversary reception in the Blue Room of the White House, July 20, 2015. (Official White House Photo by Pete Souza).