Award: Blue Ocean Robotics is the next unicorn

The award-winning Danish robot company Blue Ocean Robotics, specialized in professional service robots, has been honored as one of the 10 most promising technology companies in Denmark by the international analytics house Tracxn. The title of “Minicorn” is related to the term “Unicorn”, which was invented by investor Aileen Le as a term for privately owned entrepreneurial companies with a billion-dollar valuation. With a steep growth and valuation of now dkk 800 million, Blue Ocean Robotics is well underway to realize a huge global potential in the service robot market.

The Odense-based company, Blue Ocean Robotics, stands out in the crowd in a screening of 2500 Danish technology companies. Together with nine other strong Danish technology companies, the Robot Venture Factory focused on professional service robots has been pointed out as company to follow closely. Blue Ocean Robotics has become a part of the so-called Soonicorn Club: Top Tech Startups In Denmark to Watch Out For. Behind the award is one of the world’s largest analytics houses Tracxn, whose 750 employees screen 800,000 companies worldwide every year, and this year Blue Ocean Robotics was featured. This way, Tracxn helps international investors identify the most promising corporate investments globally.

This is far from the first time the robot company is honored for its accomplishments. In 2019 alone, the company went on to win the prestigious international robotics award, IERA Award, received Technology Denmark’s Company Pact Award and also got its third Børsen Gazelle Award for the third year in a row, as well as got a finalist ranking in the competition to become the Robotics Company of the Year 2019.

The CEO at Blue Ocean Robotics, Claus Risager, is happy with the recognition as a Minicorn:
“The new title is a great tribute to our employees and all the efforts they dedicate to create innovation, development and commercial success. And at the same time we are extremely proud to bring robots to the market that not only help solve some of the world’s greatest problems with global warming and the fight against multi resistant bacteria and viruses such as for example the coronavirus, but which is also a good investment for our owners in a business context,” states Claus Risager.

“The company is advancing at a rapid pace and has a huge opportunity going forward. In fact, in my eyes, Blue Ocean Robotics is now a clear candidate to become a unicorn, i.e. worth over a billion dollars. The company also significantly contributes to develop the exciting robotics cluster in Odense,” says Lars Tvede, who as an investor is very keen on spotting super trends.

The fact that robot development has a focus on automating service tasks is a strong trend in the market. The staff at Blue Ocean Robotics, which now totals more than 100 people, is engaged in developing, producing, marketing, selling, supplying and supporting a wide range of professional service robotics. Together, the product range represents a conspicuous growth potential in healthcare, hospitality, construction and agriculture.

For example, the disinfection robots from the subsidiary UVD Robots are already on the market in over 40 countries. The robot increases the safety of both staff and patients by reducing the risk of contact with bacteria, viruses and other harmful microorganisms. Right now, the robots are working overtime in Asia to prevent the spread of infections related to the current coronavirus outbreak.

Robots for use in the mink industry is also something Blue Ocean Robotics works with. This is done in collaboration with Hedensted Group. The feeding robot HG Robo Feeder can ensure that Denmark can maintain its leading position in mink breeding despite the Danish salaries. The market’s response to the product indicates that in five years, at least half of the Danish mink will be fed with HG Robo Feeder.

In the company PTR Robots, new innovative technologies pave the way for a healthier work environment in the healthcare sector with a robot that helps staff both move and rehabilitate patients. 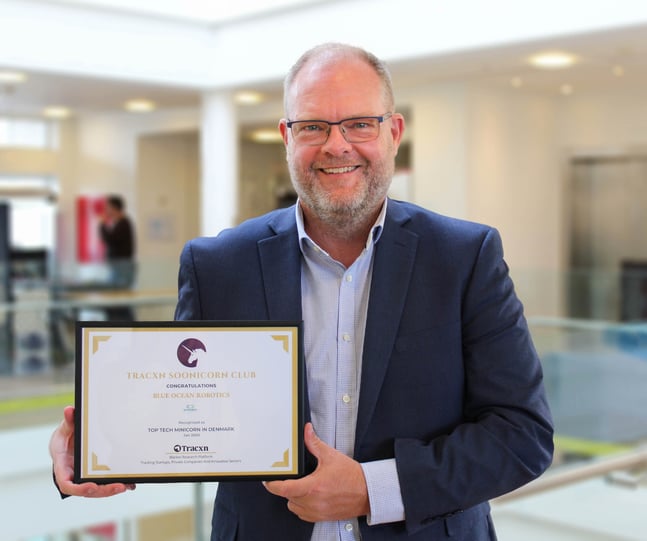