As robots gain attention as weapons to fight the spread of Coronavirus globally, Blue Ocean Robotics announced that it has been included in Robotics Business Review’s list of the 50 most influential robotics companies in the world (RBR50) for its UVD Robots. The RBR50 is the annual list of the 50 most innovative and transformative robotics companies that have achieved commercial success in the past year. The recognition was earned for the work with UVD Robots based on the health benefits of its technology as well as continued growing demand for its safe disinfecting capabilities.

UVD Robots’ innovative solution, which combines deep microbiological know-how, autonomous robot technology and ultraviolet light to create the world’s best UV-C based disinfection solution, has been proven to eliminate pathogens like coronavirus and bacteria within 10-15 minutes in a patient room. The company’s self-driving, disinfecting robots have been rolled out to more than 60 countries worldwide, including Italy

Christiano Huscher, at Gruppo Poloclinico Abano, which operates a number of private hospitals in Italy, notes, “Before we received the UVD robot, six of the hospital’s doctors had been infected with COVID-19. Since we started using the robot two months ago to disinfect, we have not had a single case of corona among doctors, nurses or patients.”

One out of 15 patients gets infected at the hospital
Founded through a collaboration with Odense University Hospital, Blue Ocean Robotics created UVD Robots as a subsidiary in 2014 to solve the problem of Hospital Acquired Infections (HAI). According to UVD Robots, when 15 people have visited a hospital, on average, one of them will acquire an infection. In American hospitals alone, the Centers for Disease Control (CDC) estimates that HAIs account for an estimated 1.7 million infections and 99,000 associated deaths each year.

“UVD Robots has a global dominance with more than 75% of the world market of autonomous mobile UV-C disinfection robots - also known as the second generation UV-C systems. These solutions are superior when it comes to the ability to kill pathogens, operational efficiency and total cost of ownership compared to the first generation of UV-C systems which are basically UV-C lamps placed on a wagon that staff can push around at the hospital,” says Claus Risager, CEO at Blue Ocean Robotics. “We are very proud of our unique position in the market. As the market is expected to grow significantly over the coming years and since UVD Robots is also technologically 2-4 years ahead of any competitor with patented solutions and more than 60 unique features, UVD Robots is also expected to be a key market player over the coming years.”

UVD Robots experiencing additional growth in non-healthcare sectors
Eugene Demaitre, senior editor at The Robot Report and Robotics Business Review, notes that Blue Ocean Robotics has successfully grown into a 'venture factory' that commercializes robot inventions such as the UV disinfection robot. “The solution was introduced to the market even before the COVID-19 pandemic, and since then UVD Robots has been able to scale its production to the growing global demand for automated disinfection. We expect that the Danish RBR50 company will, in the future, help both hospitals and other localities prevent infections as well.”

UVD Robots  is seeing not only growing interest by hospitals worldwide, but also from nursing homes and other healthcare institutions, schools and day care centers, with increased demand from shopping malls and commercial airports as well. “The importance of being able to offer employees, customers or guests disinfected environments will remain top of mind even as we move past the Coronavirus pandemic,” says Per Juul Nielsen, CEO of UVD Robots, adding that the company has adjusted its growth forecast upward several times during 2020 as sectors outside of healthcare have realized the potential of autonomous UV disinfection. 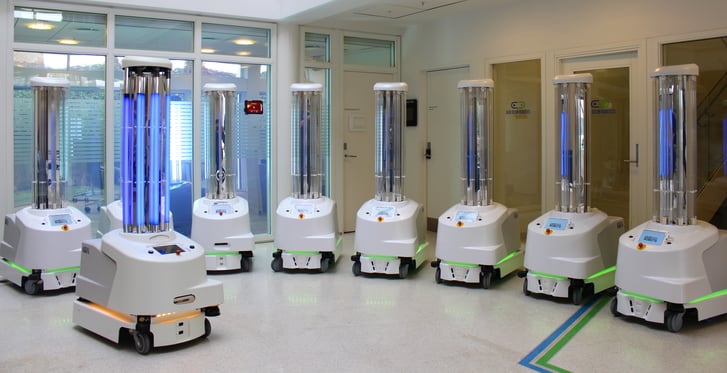 On average, one in 15 people is infected every time they are in the hospital. In American hospitals alone, the Centers for Disease Control (CDC) estimates that Hospital Acquired Infections (HAIs) account for an estimated 1.7 million infections and 99,000 associated deaths each year.