Last night, Blue Ocean Robotics won the prestigious European award euRobotics Technology Transfer Award 2020 together with its subsidiary UVD Robots and with Odense University Hospital. The award is given to the European consortium that is the absolute best in turning research into business in the robotics industry. The Danish consortium won the prize for the mobile disinfection robot, which addresses the highly relevant global task of infection prevention.

"We are dealing with a robot that solves a currently highly relevant issue, and at the same time the Danish consortium has been extremely successful in commercializing the robot”. This is what the jury concluded in the euRobotics Technology Transfer Award 2020 when the winner was revealed last night.

It was the strong consortium from Europe’s “robot capital” Odense, that won the competition for euRobotics’ Technology Transfer Award 2020. It was announced last night at the European Robotics Forum 2020 (ERF2020) conference in Malaga, where each of the six nominated consortia presented their results in bringing research to places where it makes a difference both society- and business wise.

Successful interdisciplinary collaboration
The robot is a result of an exemplary collaboration between Odense University Hospital and Blue Ocean Robotics. Together, they set the goal of solving the problem that too many patients get infections during hospitalization. In Denmark alone, the problem is so great that every year 50,000 patients get a hospital acquired infection, and more than 1,000 patients die as a direct consequence.

As part of a tender by the Hospital Partnership (Sygehuspartnerskabet), Professor and Chief Physician, Hans Jørn Kolmos, started a collaboration on the development of the robot with Claus Risager, CEO at Blue Ocean Robotics, and his team. Later, Per Juul Nielsen and his team joined as the collaboration went from development to commercialization. Per is the CEO of UVD Robots, a subsidiary of Blue Ocean Robotics, specializing in distributing UVD robots to the world.

The parties created a solution that combines the latest technology in mobile robots with an ultraviolet light top module. The UVD robot can eliminate 99.999% of all bacteria within 10-15 minutes in a patient room. By using the robot as part of the cleaning cycle, the general occurrence of bacteria can be greatly reduced. Recent tests from a hospital in Taiwan shows that UVD robots used properly can reduce the number of bacteria by 77% in intensive care units and 83% in operating theaters. With such a large reduction, it is expected that there will be a significant reduction in the number of patients and staff who are infected, which is expected to be demonstrated by subsequent tests and measurements.

Right now, Danish disinfection robots from UVD Robots in Odense are being shipped at great speed to areas most affected by the coronavirus, and the first robots are already active in hospitals at the epicenter of the outbreak in Wuhan. The robot helps authorities prevent infection spread with more effective disinfection. With ultraviolet light, UVD robots can move around autonomously and disinfect and kill viruses and bacteria.

euRobotics is a nonprofit organisation with base in Brussels. Its objective is to make robotics beneficial for Europe’s economy and society. With more than 250-member organisations, euRobotics also provides the European Robotics Community with a legal entity to engage in a public/private partnership with the European Commission, named SPARC, which has supported the robotics development with a budget of €700 million from 2014-2020. 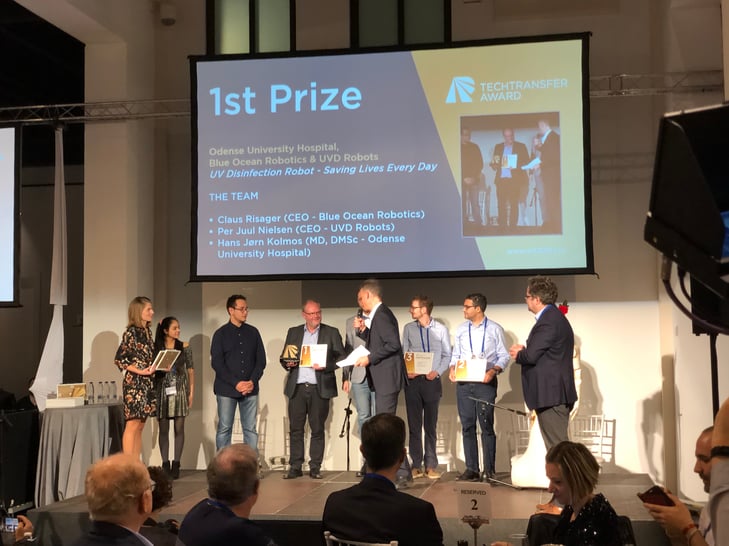 "We are dealing with a robot that solves a currently highly relevant issue, and at the same time the Danish consortium has been extremely successful in commercializing the robot”. This is what the jury concluded in the euRobotics Technology Transfer Award 2020 when the winner was revealed last night.  It was the consortium consisting of Blue Ocean Robotics, UVD Robots and Odense University Hospital that won. In the picture, Claus Risager, CEO in Blue Ocean Robotics, receives the award.