With the latest forecast by the U.S. Travel Association by Tourism Economics predicting $505 billion in losses globally through the end of 2020, UVD Robots announced its autonomous disinfecting robot is being increasingly deployed within hotels, railways, and airports across the globe. UVD Robots’ mobile, fully autonomous robot integrates UVC light and a large number of disinfection-specialized apps to disinfect against viruses and bacteria not only on surfaces, but the air as well, providing a fully comprehensive infection control and prevention solution.

“As the travel and hospitality industry looks to bring travelers back, they are working to meet new and heightened expectations for safety and cleanliness in order to build trust,” said Per Juul Nielsen, CEO of UVD Robots. “Because our UVD Robots are simple, safe and effective, we are working with an increasing number of hotels, airports, railways and others to bring hospital-grade disinfection solutions to these facilities. We couldn’t be more thrilled than to play a role in the recovery of this industry.”

Hotels
In early September, Yotel Boston, a hotel featuring 326 cabins located in Boston’s Seaport District, announced it would implement the UVD Robots technology. Beginning September 15, 2020, select cabins within Yotel are being cleaned by the UVD Robots when vacant while all high-touch public spaces are also being disinfected upon closing.

“YOTEL Boston is honored to implement the UVD Robot technology, offering guests an even deeper level of disinfection throughout public spaces and selected cabins,” said Trish Berry, General Manager, YOTEL Boston. “Right now it’s critical for the hospitality industry to not only enhance how we protect travelers but also provide them with reassurance that we’re taking every possible step from check-in to check-out. Our partnership with UVD Robots is an extension of the YOTEL signature hi-tech, lo-touch customer experience and the operation #SmartStay protocols we’ve established to deliver every type of guest with exactly what they need to feel safe throughout their travels."

Beginning September 15, 2020, select cabins within Yotel are being cleaned by the UVD Robots when vacant while all high-touch public spaces are also being disinfected upon closing. Photo credit: YOTEL Boston

The autonomous disinfection robots are also in use in Europe’s hotel industry, e.g. at the Clarion Hotel & Congress Copenhagen Airport applying UVD Robots to disinfect conference rooms and public areas.

"It's a very exciting opportunity for us to explore the use of UVD Robots. I'm amazed to see robots now move from mowing your lawn and vacuuming your house to handle disinfection," explained the General Manager Jesper Olesen, who also highlights this as a competitive differentiator. "We see hospital-grade disinfection as an important part of our new value proposition when communicating to guests why they should choose our hotel."

Airports and train stations
Last week, The Gerald R. Ford International Airport (GRR) became one of the first airports in the U.S. to use a UVD Robot. UVD Robots were used to disinfect bathrooms, baggage claim areas, passenger checkpoints, TSA areas, and more after hours. 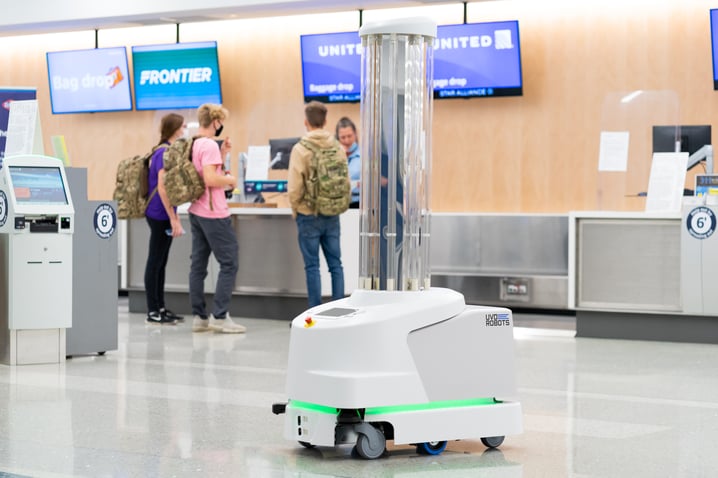 The hyper intelligent UVD Robot is being increasingly deployed within hotels, railways, and airports across the globe. Photo credit by The Gerald R. Ford International Airport.

“Grand Rapids airport chose to use UVD Robots due to the autonomous ability of the product allowing GRR to be on the forefront of UVC Technology,” explained Timothy Haizlip, C.M., Maintenance Director of Gerald R. Ford International Airport Authority. “UVC technology creates a safer environment for our travelers and is in alignment with our ‘Fly Safe, Fly Ford’ Campaign.”

Additionally, as part of its “Fly Safe” campaign addressing Covid-19, UVD Robots has been operational at Heathrow Airport in London for more than two months. “We’ve received an excellent response on the robots’ performance there,” says Heath Williams, CEO and Founder of NESA Robotics, UVD Robots' sales partner in the UK, who is also working with St. Pancras International railway station in London, which will be receiving UVD Robots in the coming days, and planning to deploy them to disinfect washrooms at the stations.

Several additional projects are also currently being carried out in the travel industry within the Middle East, including the Hamad International Airport in Qatar.