Get the experience of being there without actually going there with Blue Ocean Robotics’ new GoBe Robots that replace travel with a remote presence. Users remotely control the new telepresence robot and get a distinct feeling of being where the robot is as they receive live video streams of the location as the robot moves around it. This enables active collaboration and interaction between people, no matter how far they are from each other. As the Covid-19 pandemic spreads, GoBe Robots are also quickly emerging as an effective tool in breaking down chains of infection, preventing spread of coronavirus and other diseases and overcoming closed borders, while reducing travel budgets, working hours and transport time.

The leader in telepresence robots, GoBe Robots is now launching the next generation of the world's most climate-enhancing robot. “During the global virus epidemic, we have seen significant growth in orders,” says Peter Juhl Voldsgaard, CEO of GoBe Robots. “Telepresence robots have now become a standard technology that everyone can understand. The experience our technology gives of almost being there in person is unique. We’re now taking that experience to the next level.”

The new GoBe Robots telepresence robot is a remote-controlled mobile robot that allows communication through a 21.5-inch screen that reproduces the user’s face in natural size. A zoomable 4K camera and a wide-angle front camera give the “robot pilot” a clear overview of the location the GoBe robot discovers. The new generation of GoBe Robots also stands out with an open system that creates even more applications and allows users to maximize the potential of the technology. For example, trade show organizers can give remote attendees the ability to book themselves directly into the telepresence robot and experience booths and events while engaging with exhibitors.

Telepresence Robots Enable New Levels of Accessibility While Reducing Emissions
GoBe Robots has more than 150,000 existing users of its telepresence robots, which contribute to colossal CO2 reductions. As an example, a trip from Copenhagen to Singapore emits approx. 3.1 ton of CO2 per person. Using the GoBe Robots telepresence robot for a visit to Singapore emits a fraction of CO2, even when the power consumption of streaming and server hosting is taken into account. A company in Europe with 20 employees traveling to Asia four times a year saves 500,000 kilos of CO2 by replacing air travel with the telepresence robot.

The new GoBe Robot also helps sick children with access to school and peers, and it can give people with disabilities access to more places and experiences in the community such as museums and conferences. The CO2 reductions are also realized in the manufacturing sector.

“We have customers in the industry who have cut 90 percent of their security inspection costs because they have placed 30 telepresence robots at their factories around the world,” says Claus Risager, CEO of Blue Ocean Robotics, the parent company of GoBe Robots. “Now, the security inspectors just log into the robots and move around, investigating the environment with their local colleagues. This also enables them to spend more time with their family at home.”

GoBe Robots is part of Blue Ocean Robotics' family of preventative service robots that help fight coronavirus and other diseases. Together with Blue Ocean Robotics' brand, UVD Robots, GoBe Robots helps reduce the spread of dangerous bacteria, viruses and other microorganisms. Where UVD Robots kill bacteria and viruses with UV-C light, the GoBe Robots telepresence robots can break contagion chains by keeping physical distance by allowing users to participate through GoBe Robots instead of physically showing up.

About GoBe Robots:
GoBe Robots is the leading manufacturer of professional telepresence service robots. The company is present in more than 50 countries through its global Solution Provider network, a number expected to more than double over the next 12 months. The company's telepresence robots significantly reduce CO2 footprint, helps with social inclusion and prevents the spread of diseases by breaking the chains of infection. 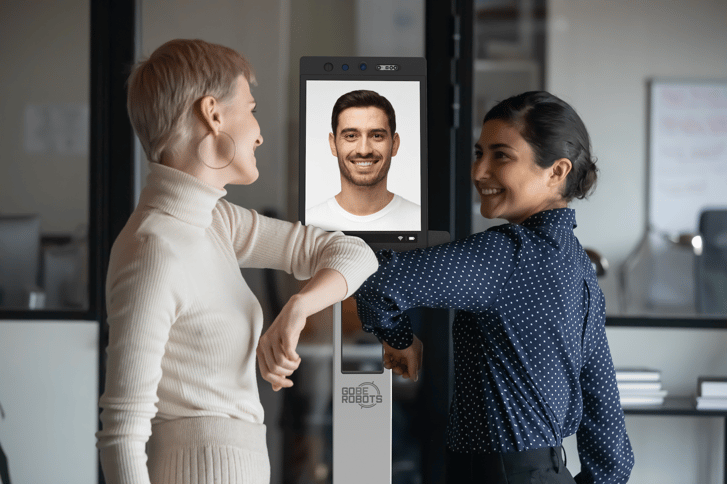 The new GoBe Robots telepresence robot is a remote-controlled mobile robot that allows communication through a 21.5-inch screen that reproduces the user’s face in natural size. A zoomable 4K camera and a wide-angle front camera give the “robot pilot” a clear overview of the location the GoBe robot discovers.