Danish manufacturer of service robots for the healthcare, hospitality, construction and agricultural sectors, Blue Ocean Robotics, wins one of the most prestigious awards in the robotics industry, the IERA Award 2019. The Odense-based company was nominated for UVD Robot, a UV disinfection robot that helps increase patient safety by reducing bacteria and other harmful microorganisms. With a UV disinfection robot, hospitals can guarantee a 99.99% disinfection of hospital wards and thus a significantly reduced risk of patients, staff and relatives contracting hospital-related infections.

IERA Award is one of the world’s most prestigious awards in robotics. It honors the collaboration between science and industry in the production of robots and is awarded by the International Federation of Robotics, IFR, and the IEEE Robotics and Automation Society (IEEE/RAS), which is the world’s largest professional tech organisation with more than 420,000 members in over 160 countries. The award was presented in Montreal, Canada, Wednesday evening, Danish time.

“We’re incredibly proud of winning the IERA Award 2019 for a ground-breaking product that not only reduces the risk of patients contracting hospital-related infections, but also to a high extent visitors and hospital staff. Everyone can feel safe in rooms that have been disinfected by the robot,” says a proud Claus Risager, CEO of Blue Ocean Robotics in Odense, Denmark.

The UV disinfection robot is autonomous and ensures that surfaces in a hospital ward are treated with light from several angles and up close. An independent study of the robot concludes that the robot eliminates 99.99% of bacteria and other microorganisms. The market for the robot, which has been developed in ground-breaking cooperation with leading hospitals in Denmark, is expected to be massive. 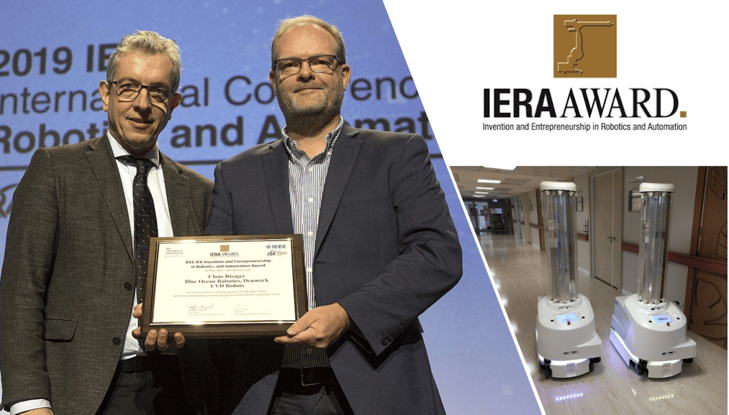