PTR Robots is a Danish service robot company introducing a robot that can both mobilize and transfer patients—while simultaneously boosting the working environment. The invention has been developed in close collaboration with healthcare professionals at a university hospital and a nursing home. The user-friendly robot frees up time for care and nursing in a busy sector as it enables caregivers to better handle transfers and gait training of residents without having to depend on other colleagues.

The patient lifting equipment has now become mobile and intelligent. PTR Robots has developed the world’s first robot solution that can flexibly drive around at institutions in the healthcare and nursing sectors. While it helps individuals with impaired functions to be transferred and rehabilitated, it relieves the strain on staff in physically burdensome and labor-intensive tasks. According to the WHO, lifting injuries account for one-third of all occupational injuries among nurses. A PTR Robot can also reduce the risk of infection, because only one caregiver is needed to perform a patient transfer.

One out of every four bedridden patients in a typical hospital is not self-reliant and therefore needs assistance from staff, both to be transferred and to be rehabilitated. The need to transfer and rehabilitate individual residents is even more pronounced at nursing homes.

The PTR Robot is designed to ‘shrink’ in size so it can easily fit through an ordinary doorway. This means that the robot outperforms traditional, stationary ceiling hoists in terms of flexibility. It is highly acclaimed for its user-friendliness in everyday use, which is also true for  PTR Robots’ parent company, Blue Ocean Robotics,’ other service robots specialized in disinfection and telepresence.

“Many nursing homes, hospitals and institutions are keenly interested in our patient transfer and rehabilitation robot. If an elderly person breaks his or her hip, the robot can help him or her stand up right after the operation. The robot also accompanies the patient when taking the first steps after surgery,” says Lone Jager Lindquist CEO, PTR Robots. 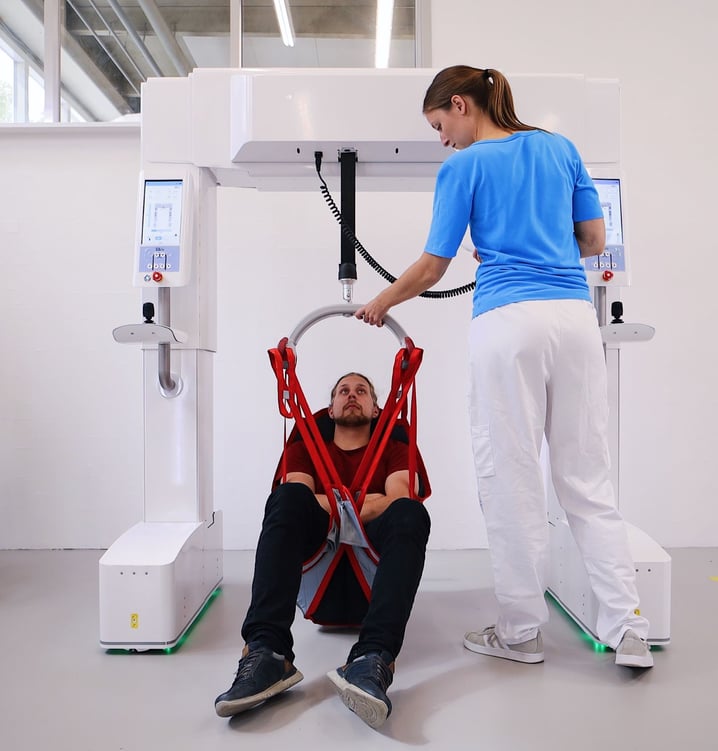 PTR Robots was developed and tested in close collaboration with Zealand University Hospital, and Vonsildhave Nursing Home, operated by the nursing group Attendo. “The testing of PTR Robots really impressed us. We can see interesting perspectives in the way we can assist residents and patients with care and rehabilitation, but there are also interesting perspectives in terms of improving the work environment,” says Søren Andersen, Managing Director, Attendo.

At the new university hospital in Køge, Denmark, Project Director Helle Gaub predicts that increasing numbers of patients will have to rely on being assisted in the future.

"When making a large investment in new hospital buildings, developing an innovative approach to lifting technology is essential in creating a flexible deliverance of healthcare. Being able to lift and move patients in all rooms and areas is essential for an effective use of resources, and this is why we at Zealand University Hospital prioritize being a partner in developing solutions of future healthcare.” says Helle Gaub.

There are countless everyday situations in the healthcare and nursing sectors where patients have to be transferred: from bed to wheelchair, from wheelchair to toilet or shower chair and in emergencies after an accidental fall or from an ambulance stretcher to a hospital bed. The robot’s rehabilitation functions are equally important because they can help patients be more self-reliant in everyday routines. These situations include gait training after a stroke where the robot can be set up to bear more or less of the patient’s body weight.

At Vonsildhave Nursing Home, the management sees great potential in the PTR Robots:

“The robot instills a sense of dignity in the patients simply because it can make many more transfers with greater flexibility. I am particularly pleased with the rehabilitating function because it gives residents such a high level of freedom. They can train in their own surroundings with their customary caregivers and other residents. Also, they do this in the setting they are accustomed to residing and living in. At the same time, their enhanced mobility is enormously valuable for the residents’ well-being and quality of life,” notes Ditte Korsager, Center Director, Vonsildhave Nursing Home.

Synergized development of service robots
PTR Robots is a subsidiary of Blue Ocean Robotics, which has already revolutionized the service robot market via subsidiaries such as UVD Robots and GoBe Robots. The company’s disinfection robots and telepresence robots have indisputably proven their legitimacy. The COVID-19 pandemic has only intensified the interest in the new opportunities created by the technologies in the healthcare sector, as well as in many other sectors that want to ensure clean surroundings and overcome long distances and closed borders.

“With PTR Robots we have created a brand-new product category in the area of patient transfers and rehabilitation, similar to what we did with UV disinfection with our subsidiary UVD Robots,” says Claus Risager, CEO, at Blue Ocean Robotics, and now Chairman of the Board at PTR Robots.

UVD Robots are currently used to disinfect hospitals, hotels, food processing plants, clean rooms in the pharmaceutical industry, airports, train stations, preschools and much more all over the world.